A 17-year-old Tom Turcich was devastated when he heard the news: his close friend Ann Marie had just passed away. They were just high school kids in New Jersey, and the sudden loss weighed heavily on him. He wanted to honor his friend, the day before his 26th birthday, he took his first step on what would be a five-year year journey. After traveling around most of the world, Tom felt lonely, so when he got to Austin he decided to adopt a furry companion. He named her Savannah. While trekking across South America’s Andes Mountains from Chile to Argentina, Tom’s body could no longer take the heat and stress, simply collapsing under him. Savannah offered a helping paw. “She sat down beside me and waited patiently,” Tom said. The moment was both healing and reassuring as Tom knew he could count on his pup for the rest of the arduous journey.

Tom’s next is to travel through the continent of Australia before concluding his remarkable walk across the United States from California and back to New Jersey. This route would make Savannah a world record holder. Amazingly, when The World Walk is completed, Savannah will be the world’s first doggo to literally walk around the globe!

Cheetah-Dog Friendship Isn't As Strange As It Sounds 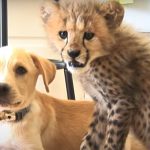