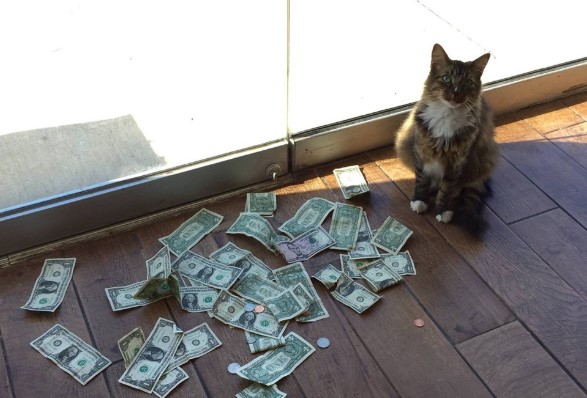 An office cat kept mysteriously bringing money around the office… and nobody had any idea how. Sir Whines-A-Lot is a happy office cat of the marketing firm GuRuStu in downtown Tulsa, Oklahoma. During the day, kitty is an excellent employee… but during the evening, something started to smell a bit… fishy. Upon returning to work one morning, GuRuStu founder Stuart McDaniel noticed some cash on the floor near the glass door where Sir Whines-A-Lot likes to sunbathe and people-watch. And it didn’t stop there! McDaniel surmised that this little kitty con artist has been luring passersby to the glass to “play” with him… and a toy that could fit perfectly through that slot would be a bill. “I’m guessing the first people didn’t intend to lose their dollar,” McDaniel said. “They probably put it in to mess with him, and he snatched it. When you hold money there, he’ll bat at it playfully at first, like, ‘Oh, that’s kinda fun.’ But then all of a sudden he’ll bite it and rip it from your hand. He does it so fast, you don’t even realize what’s happened.” In time, this little game has become quite popular, and Sir Whines-A-Lot is racking in the bills.

“When the money comes through, he pats it. Like, ‘This is my money now,’” McDaniel said. “He’ll even wallow in it — like, rolling in the dough. He’ll literally roll around in it. I’ve never seen anything like it.” So far, Sir Whines-A-Lot has raised over $100 — donated under his pseudonym: CASHnip Kitty – which goes to the city’s homeless population. “He was once just a goofy cat, but now we have a lot more respect for him. He’s doing his part,” McDaniel said. “I’d recommend other businesses have pets at their office — but I’ve never met a cat quite like him.”