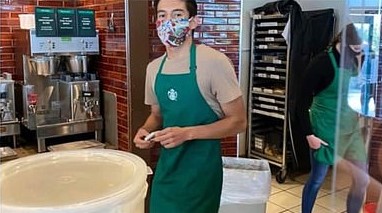 The California woman whose viral Facebook post seeking to shame a Starbucks barista for refusing to serve her because she was not wearing a mask has backfired and fueled a massive fundraising effort is now seeking to reap the rewards. Amber Lynn Gilles, a yoga instructor, photographer, and self-proclaimed anti-vaxxer, took to Facebook on June 22 to blast the barista – identified as Lenin Gutierrez – for denying her service at a Starbucks in San Diego. ‘Meet Lenen [sic] from Starbucks who refused to serve me cause I’m not wearing a mask,’ she said in the post, tagging the coffee shop off the 4200 block of Genesee Avenue. The woman who inspired this GoFundMe campaign by trying to shame San Diego barista, Lenin Gutierrez, in a spat over a face mask now demands at least half of the proceeds. The post, which has been deleted after drawing numerous negative comments directed at Gilles, inspired a stranger, Matt Cowan, from Irvine, to launch a GoFundMe campaign for Gutierrez as a way of tipping him for his work. In an interview with ABC10 this week, Cowan said when launching the campaign, titled ‘Tips for Lenin Standing Up To A San Diego Karen,’ he never expected the outpouring of support that followed.

‘I set it at $1,000 thinking that was a reach but we would be lucky if we hit like $250 and when we hit $100 I was overwhelmed by that,’ said Cowan. As of late Friday afternoon, the fundraiser has drawn more than $104,000 in donations. New York Times reported that in an interview last weekend, Gilles said she wants at least half of all the proceeds from the online campaign ‘because they’re using me to get it.’ She continued: ‘they’re using my name, they’re using my face, and they’re slandering me.’ Gilles also has threatened to sue Cowan, claiming defamation and slander. Meanwhile, Gutierrez told ABC10 that he plans to use the money to pursue a college degree in kinesiology – the study of movement – and to donate some to charity. ‘Everything I wanted to do seemed very far away, but with all that’s going on, it seems more within my reach,’ he said. ‘Everyone showed my kindness, so now I want to show it back.’ The plan is for Gutierrez to receive the money from the fundraiser sometime next week.