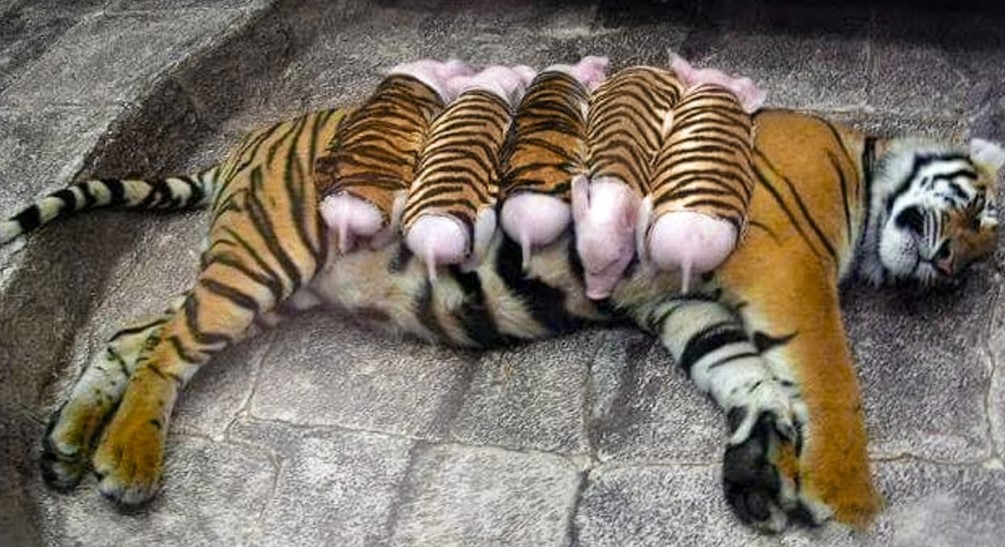 On the heartwarming scale this rates as a positive scorcher. A forlorn tigress, heartbroken because her own cubs have died, is fooled into adopting a litter of piglets when zoo officials in California wrap them in tiger skins. Such a thing had never been tried before, according to the email which accompanied these pictures as they were sent around the world. Unfortunately, there was a twist in the tiger’s tale. Though the pictures have not been faked, an animal welfare pressure group investigated and discovered they were actually taken at a zoo in Thailand. The Sriracha Tiger Zoo, an hour’s drive from Bangkok, has been accused of causing its exhibits unnecessary suffering, and of using stunts to gain publicity. These pictures must have been part of such a set-up, say, experts, because it was unnecessary to wrap the piglets in their cute little tiger-skin coats. It is apparently common practice in Thailand for tigers to suckle pigs, and for pigs to adopt orphaned cubs.

The tigress in these pictures was herself brought up by a sow and sees pigs as family. Though she had been given these babies to bring up, it is unclear whether she had lost a litter of her own, as the story claimed. In another twist, the zoo has been investigated for allegedly breeding tigers for export to China – where tiger parts command high prices for use in traditional medicines. Sommai Temsiripong, one of the zoo’s owners, was charged with breeding tigers without a license. On another occasion, 23 tigers died of bird flu after being fed infected raw chickens. Critics say that behind the scenes tigers are bred in poor conditions and the London Zoological Society has been critical of Sriracha’s animal husbandry. Adam Roberts, an investigator with Animal Welfare International, the respected American pressure group which investigated the pictures, wrote in its quarterly magazine that the zoo – with more than 400 tigers, a handful of Asian elephants, of crocodiles, camels, snakes, and other exotic animals – had many troubling exhibits.