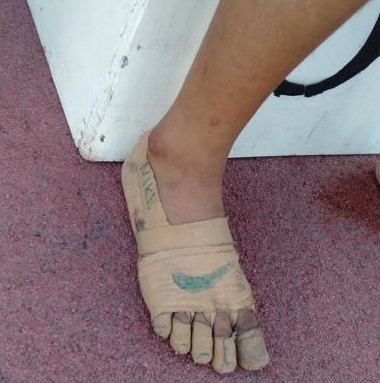 To some athletes, brands count for everything when it comes to performance. But Filipina Rhea Bullos bagged three gold medals (400 meters, 800m, and 1,500m) at a local inter-school athletics meet on Monday without wearing shoes, opting instead to wrap her feet in tape and drawing the iconic Nike “swoosh” logo on them. Bullos, 11, was one of several on her team of 12 athletes who made their own footwear because they had only two pairs of running shoes among them at the competition in the central province of Iloilo. Trainer Predirick Valenzuela, whose photo of Bullos’ feet on social media has gone viral, said she showed her raw talent after taking up athletics only a month ago. He added that a pair of running shoes could make a big difference to her in the future. “Winning three medals in a competition like that is difficult, but she did it,” he said by telephone from Iloilo. “I’m glad she won. She worked hard to train. They get tired when training only because they don’t have shoes. “It’s every athlete’s dream to wear spike shoes. Not necessarily Nike, as long as they have decent shoes to be able to compete.” Social media has done its part for Bullos. The Daily Guardian, a tabloid newspaper in the Philippines, on Wednesday tweeted photos of the athlete at a shoe store in local mall SM City, trying on some brand new shoes. “SM City buys new shoes for Rhea Bullos, a runner who has been trending on social media after her picture wearing makeshift ‘Nike’ shoes went viral,” read its caption. Bullos was said to have been given socks and a sports bag as well. English fitness website shape.com also reported on Friday that many around the world took to Valenzuela’s Facebook post to cheer the athlete on. “This is by far the best thing I have seen today! This girl is truly an inspiration and has definitely warmed my heart. From the look of it she was unable to afford runners but she turned it into a positive and won!! Go girl,” wrote one person. Others tagged Nike and asked the American sportswear company to provide some gear for Bullos and her fellow runners, saying that they should be receiving “a lifetime of free Nikes” for their efforts.