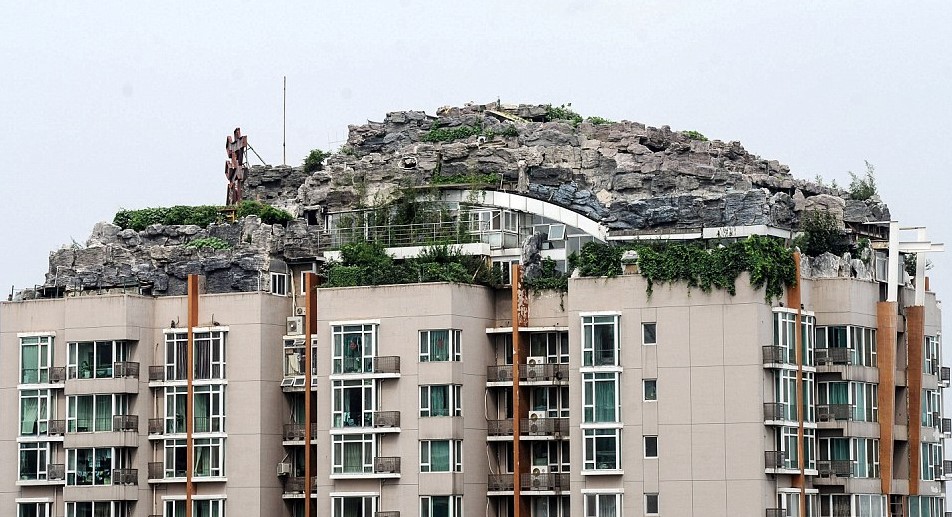 A Chinese man has spent six years building his dream mountaintop villa – on top of a Beijing apartment block. Eccentric Professor Zhang Lin shifted tons of rubble and rock onto the roof of the building to construct the outrageous home which looks like it has been carved from a mountainside. The property even has a rocky mountain garden, complete with rubble and shrubbery. Professor Zhang Lin has spent six years shifting rocks and rubble to the roof of this apartment block to build his dream ‘mountaintop’ penthouse The home was built by Professor Zhang Lin but it has emerged he never had planning permission. The mountaintop villa appears to be supported by steel struts added to the side of the building. But his distraught neighbours are less than impressed with the project and fear the building is about to collapse.

The rooftop home, which never received planning approval, has caused cracks to appear in his neighbours’ ceilings and walls while some have had to put up with leaks from broken pipes and drains. They have also been forced to live with the noise and disturbance caused from the building work. One resident said their apartment is constantly flooded while another described the academic as a ‘menace’. ‘This was originally a small attic when he bought it. But he tore that down and built this mountain on top of us,’ said one. ‘He’s broken drains so we’re always being flooded when it rains and there are huge structural cracks in our ceiling and walls,’ they added. ‘He is a menace as a neighbour and he didn’t get any permission to build this monstrosity,’ said another. Mr Lin could now be ordered to tear down his mountain penthouse if it is deemed unsafe. ‘It has come to our attention that Professor Zhang did not apply for permission for this structure. So unless he can prove it is safe, it will have to come down,’ explained an city official.