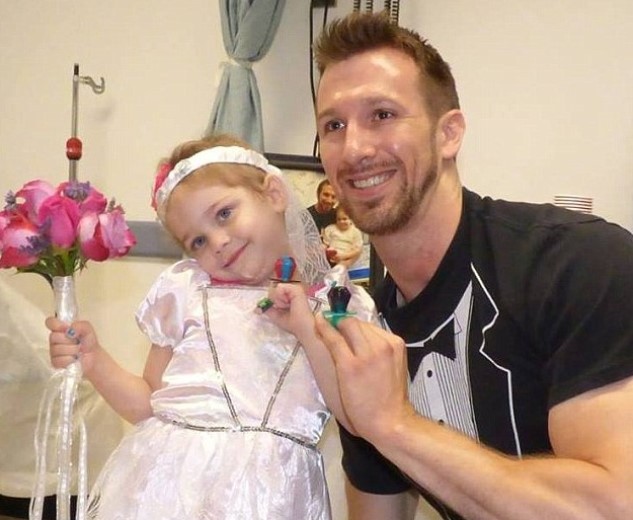 In spite of her tender age, Abby a four-year-old girl has already undergone a few misfortunes. Usually, children at her age have carefree and a fun life, but not in Abby’s case. The poor girl suffers from severe leukemia. Instead of spending her time playing and having fun with her friends, she’s always imprisoned behind the walls of hospitals. Her diagnosis is quite scary, but she is always smiling and holds up like a real hero. One day during another course of her treatment, 30-year-old nurse Matt Hickling met Abby, he was immediately drawn to her, and the two became very close and eventually developed an extremely strong connection. Abby was so smitten with Matt, that one day she told her mother that she wanted to marry the 30-year-old nurse. Maybe the girl with her innocent childish nature saw him as a guardian angel and as well as her husband too. At first, Abby’s mother laughed it off, but when her daughter continued to insist that she wanted to marry Matt, her mother decided to text the nurse and tell him about Abby’s wish. Matt was surprised when Abby’s mother offered him to marry her daughter but honored to hear the news. Abby’s mother granted him permission to talk about it on Facebook, and Matt wrote a touching update, “My patient’s mother reached out to me saying they were looking forward to coming to the clinic, mainly because of her daughter, one of the patients I’ve had the honor of taking care of in a clinic, was looking forward to marrying me.”

They made their best to make the ceremony look real, and of course, there would not be a wedding without some beautiful outfit. Abby had a nice white dress, the little girl like a real bride walked down the aisle with a gorgeous bouquet in her hands. Once she entered the marriage hall which simply a hospital room, everyone began throwing rose petals in the air and congratulate her. The girl was looking at this with bright eyes and without hesitation asked him, “Will you marry me?” Matt hugged her tightly while shouting “Of course I will marry you!” The happy newly married exchanged rings, he then pushed her in a hot pink car with a Just Married sign and tin cans tied to the back before they enjoyed feeding each other with cake. Abby received a frame with a picture of her and Matt inside that was signed by the center’s entire staff. She said it was the best day ever.